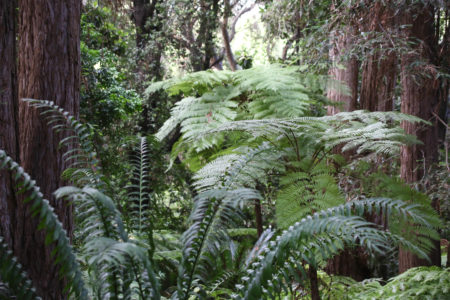 Millions of plant species have come and gone since the earliest days of planet Earth. But a handful of species – such as cycads, redwoods, tree ferns and ginkgoes – have survived virtually unchanged since the time of the dinosaurs millions of years ago. These “living fossils” are the focus of the Ancient Forest, which opened in September 2015.

Presenting plant species that existed in the Jurassic and Cretaceous periods, the Ancient Forest provides a glimpse of the natural world that dinosaurs once inhabited. The garden charts the evolutionary progression of plants from gymnosperms — or seed-bearing plants — to the earliest flowering plants, the angiosperms. Plant species in the Ancient Forest include ginkgo, conifers, magnolias, tree ferns and members of the Proteaceae family — but most especially cycads, the oldest known seed-bearing plant species.

The garden was created by incorporating a collection of more than 180 cycads, donated to Descanso in 2015 by Katia and Frederick Elsea, into a section of Descanso which already had established plants of ancient lineage, including redwoods and tree ferns. Cycads appear in fossils over 280 million years old and were a major part of the ecosystem during the Jurassic period, the age of the dinosaurs. Slow-growing, cycads often live hundreds of years. Because of this slow-growth habit, cycad populations are disappearing in the wild as plant hunters remove these beautiful, palm-like specimens for collectors.

Within the Ancient Forest, the cycads are displayed in groupings, mimicking their natural habitat in Australia, South Africa and South America. Sunlight shining through the redwood canopy acts like a spotlight that emphasizes the amazing variation in texture and color of the garden.