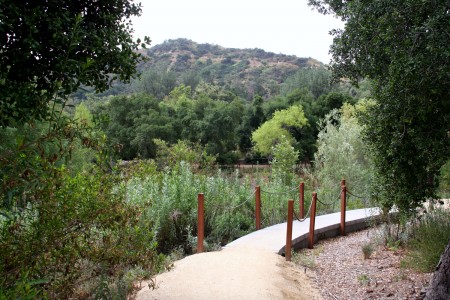 With its mix of woodland, meadow and chaparral plants, the Oak Woodland recreates the heritage landscape of the Los Angeles Basin – a plant community that included grasses, perennials, shrubs and, of course, oaks. Previously closed to the public, this space connects the California Natives Garden with access to the Rose Garden, the lake and the bird observation area.

The green-space reopens to the public a lake-side parcel of Descanso that closed in the early 1990s. The woodland mixes individual and grouped trees with native bunchgrass meadows. Winding paths lead visitors through the landscape, with seating on benches, boulders and other nooks. A boardwalk will allow visitors to stroll along the lake and observe bird activity. A wildlife camera has been installed in the Oak Woodland in partnership with the Natural History Museum of Los Angeles County. It has captured images of animals large and small, including gray squirrels, which are rare in the Gardens.

The new garden has been under development for nearly five years and built with support from the Ayrshire Foundation and the Men’s Garden Club of Los Angeles. Construction funding came from Proposition A funds committed by the Fifth District Los Angeles County Supervisors Office (the Honorable Michael D. Antonovich) and awarded to the Los Angeles Conservation Corps, an enthusiastic nonprofit education organization, whose green­ helmeted students and supervisors have been clearing weeds, grading, building roads and trails, installing irrigation, and planting some 30,000 new plants over the past year.

Community volunteers also had a hand in the work, turning out one warm March morning to plant hundreds of natives in the new garden.